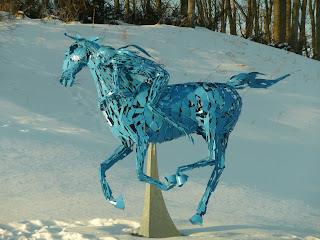 Coming full circle
﻿I didn't recognize this sculpture, but it has been 25 years since I and it were at Expo 86.  It's by Bill Lishman, of "Fly Away Home", domed home with circular refrigerator, sculptor, and husband to Paula Lishman (http://www.paulalishmaninternational.com/) fame.  A multi-talented man to say the least and his wife used to teach here at the college.  This sculpture is positioned right in front of the college and, if you can make out the girl clinging desperately to the horse's back, is a bit the way I felt last week as the course load here became apparent!
This week has been a less intense learning curve than last week.  We made rings this week and learned the piercing technique with the jeweller's saw.  Both of these things I have done before, so I focused my energy on the aspects of these techniques which was new to me.  With rings, we were making much thicker rings than I am accustomed to, anywhere from around 2 to 2.5mm thick.  That requires some effort to form I can tell you!  We also formed the shanks not from silver sheet, but from a 6mm piece of square stock and the rolling mill.  While time consuming in it's approach, this method does make more efficient use of materials in that you can make many differing shank thicknesses from the same length of 6mm stock.  Also new to me this week was the technique for forming a half round ring - think wedding band - which is surprisingly time consuming in the amount of filing required!  Once mastered though this filing skill can be applied to many different profiles of rings.  Our piercing project was mostly an exercise in mastering the jeweller's saw.  I modified a painting I found online for mine, and will use this sample later (as with some of my rings as well) in the week we spend on stone setting.  The final project for the week was to design and make a pin.  I wasn't entirely happy with  mine the way I left it yesterday, (as seen in the group image with the other projects), so I came in to the studio this morning to darken the tree.  Now I'm pleased with it; the bird doesn't seem so lost against the tree background. 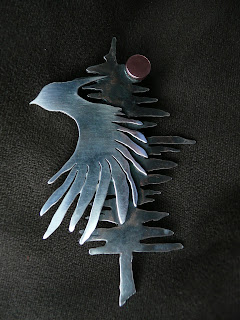 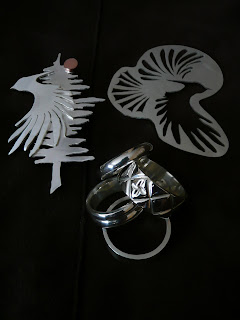 I have been very surprised at the scarcity of birds here.  I've seen a few chickadees, crows, and the turkeys.  Last weekend I went for a ski near my house and saw, actually heard first, then saw, woodpeckers.  I got a few pictures of the small one, (perhaps a downy woodpecker?), then heard the larger one and was amazed that I wasn't listening to someone chop wood in the distance.  My error with him was trying to get closer before snapping my first picture, and of course he flew away, but I believe from his size he must have been a piliated woodpecker.  I saw a raptor of some sort on my drive to school one morning, but that's been all.  I'm surrounded by forest and other than these sightings I've mentioned, the birds are just absent!  Is the plight of the songbirds so much more serious in central Canada?  Or maybe I've just always lived surrounded by birds because I surround myself with bird feeders..... 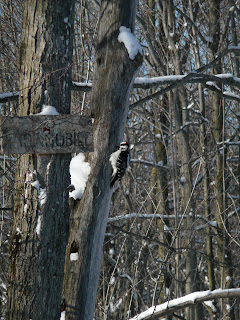