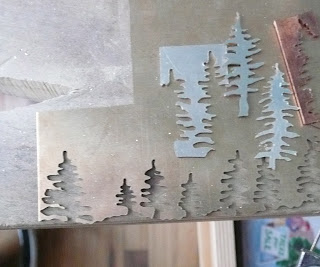 A lot of my jewellery features trees.  Specifically these coniferous trees.  I've even adopted one of them as my logo.   These trees as imagery in my jewellery go right back to the first ambitious piece I tackled after returning from the silver workshop I did at University of Taxco in 2001.  It is pictured here: 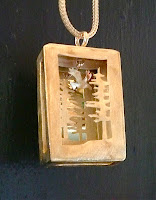 I think there's almost as much solder in this piece as there is sterling silver sheet!  I had only made a couple of rings before this piece, so it was a steep learning curve to getting it actually assembled into something that resembled the idea in my head.  Woodworking clamps and play-doh were involved because I didn't yet have a third hand, and my torch then was on a propane canister... But the bird makes a pleasant jingling sound when he deigns to face forwards, and the mirror I set in the back luckily didn't chip in a spot that's visible from the front!
All the same, I'm pleased this piece now resides as part of my own personal collection when I reflect on what I've learned between then and now about assembling jewellery. 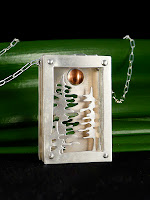 In the intervening years, I've become enamored with riveting, and the more recent incarnations of this shadow-box pendant utilizes this cold-joining technique.  The only soldered component on the pendant at right is the copper moon/sun.  I love this design, and the few I've made have sold well.  I like the sculptural aspect to them too; they can stand alone as a miniature diorama.  But I must find a way to conceal the chain... 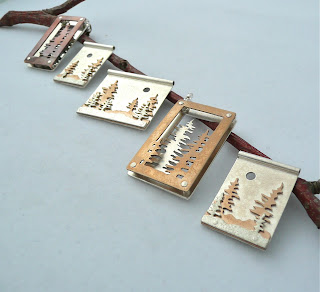 Now that I'm working more with copper and bronze in addition to silver, my most recent renditions of these pendants are incorporating multiple metals.  I've just finished these pendants this week and they're waiting to have their chains put on.  Still mostly assembled by riveting, not all are shadow boxes, but the layering is a feature I really like.

I love trying out new ideas of course, but sometimes the reinvention of a design I've worked on before can lead to exciting new places too.  I don't yet see the end of the evolution of these pendants.  For example, the dangling bird that was in the first one from 10 years ago is a detail I'd like to include in future pieces, but I need to improve upon the mechanics of it, so for now it remains a puzzle in my head.

If you'd like to see these pieces in person, why not drop down to the Newfoundland & Labrador Folk Festival in Bannerman Park, August 3-5.  Susan Lee Studios will have a booth in the craft tent.  I'd love to see you!