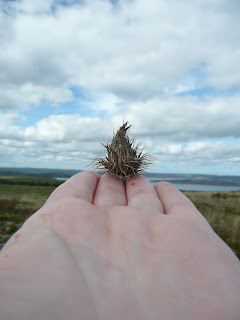 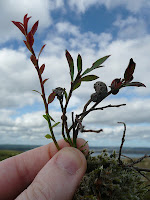 I've just come from The Rooms Art Gallery this evening, and I'm brimming with inspiration.  I may have to move in there to live until the next exhibit arrives.  The current exhibits are full of just the sort of stuff that inspires me: bones, and stones, and seed pods, birds, and detritus of all sorts.  Let me elaborate:


"Earth Skins: Three Decades of Drawing by Susan Wood", is a sensitive display of drawings and sketches, none of which are have a barrier of glass or frame to distance the viewer from examining them closely.  The portrayals of dead birds and mermaid's purses, dying flowers and women's gowns are so beautifully rendered, and seeing them exposed on the paper adds to the intimacy of the exhibit.  So much trust is implied in showing the work this way, I feel it's preciousness must be better appreciated. 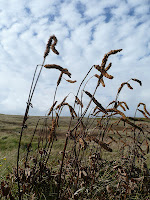 Still on the theme of mortality, and possibly morbidity, is the exhibit  "Any Sharp Knife Will Do", Curated by Jeff Nye, Installation by Seema Goel and Lee Henderson.  A fascinating variety of quotes on the subject of taxidermy, death, and hunting adorn the blackened walls.  In recessed cubbyholes, with wee lights operated by the viewer, are the heads of mice, mounted, as trophy heads are.  Another room shows images of more traditional mounted game with the view through a camera's viewfinder superimposed over the image; the animals posed ready to be "shot", as it were by a camera.  Staring at these images from the floor of the room are three taxidermic dogs observing the images of the mounted game heads.  I stared each dog down just to creep myself out a bit.  It worked.  I don't think I will ever need to immortalize a pet in such a way! 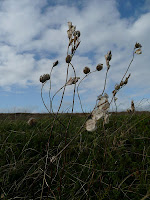 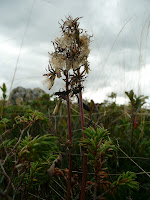 The third and most exciting exhibit to me, and the one amongst which I'd like to set up housekeeping is  "Where Rivers Meet Sea", by Lyndal Osborne.  Oh my!, the collections of things are mind boggling!  I wish The Rooms website had sneak peeks of the items on display, because they are intriguing in the extreme.  Osborne was artist in residence for a time at Gros Morne National Park, and also spent time in Australia.  She collected natural and manmade objects that accumulate as detritus in the natural world, specifically along shorelines.  The quantity is staggering!  And it's sorted methodically and with great attention to pattern and form into bowls, or on platters.  These have been set amongst a "river" of empty clear glass jars that wind along the floor throughout the space.  (My initial {suppressed, obviously} instinct upon entered the gallery was to run kicking through the jars for the sheer clatter and chaos of it!)  In a few cases she's added a bit of paint to some leaves or pods, for a cohesiveness of colour, but mostly the objects are left in their natural state.  There's even a faint but distinct aroma of being in a room so very full of bits of nature.  Possibly it's the exoticism of the natural objects from Australia, but I think it has more to do with the meticulous sorting of so many little things, that draws you in, to examine the details of each. 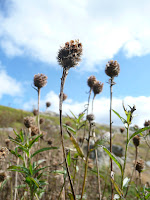 And what, in all of this, has inspired me?  Well those of you who know me, will already get it.  I enjoy the repetition and detail in nature, flawless and never-ending, a cycle repeated each season.  Although my companion is also a collector of sorts, I am more exuberant in my enthusiasm for treasures found.  So for the sake of harmony in my home, I most often bring back photographs of these natural objects, rather than the objects themselves.  Recently in my tramping about in the world, I've shifted my lens from the ever-fascinating world of fungi, to the variety of seed pods that in this fall season are in their glory.  I don't know what I plan to do with these images just yet, but they are quickly forming a collection on their own. So in the absence of tantalizing images of the exhibits at The Rooms, here is my collection of seed pods in the sky. 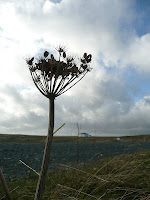