The making of "Drifting" for the Great White North Exhibit 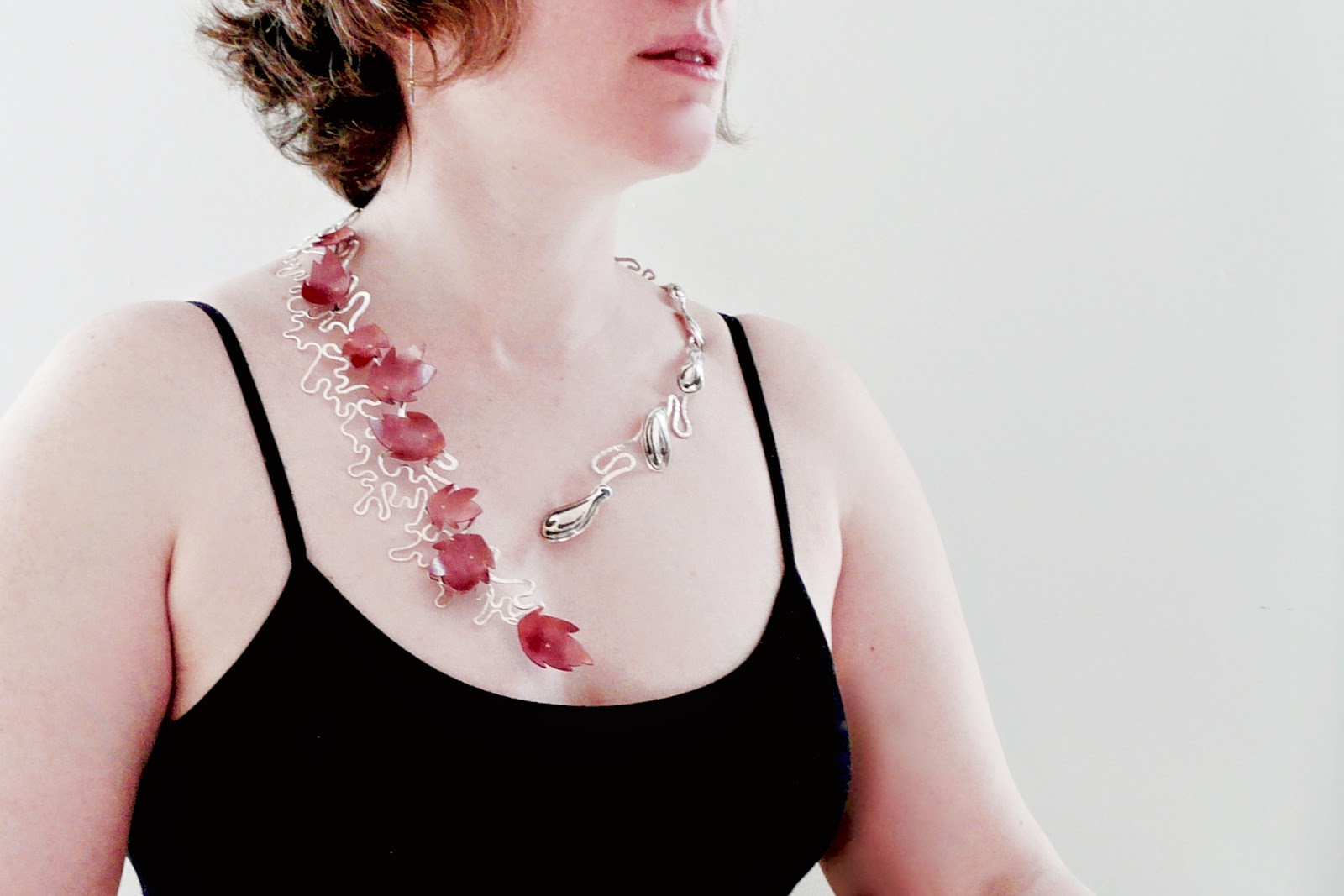 Winter is a hard time to keep up on blog posts for two reasons: first, many of the projects I'm working on are commissions and I just can't spill the beans on my customers by leaking images of the works in progress, and secondly, this is the time of year I tackle my submissions for the annual national jewellery exhibition in Toronto and it's verboten to reveal the finished piece before the jurying is done.

But the jurying is done!  And this year my piece has been accepted into the show!  Yay!

The national jewellery exhibition has been hosted by Zilberschmuck Gallery for the past ten years, but with the unfortunate closure of that spectacular space last year, the torch has been passed to 18 Karat Studio and Gallery, also in Toronto.  They have taken on the not insignificant challenge of this exhibition and have run with it!

The show now has a name that will carry it from year to year: The Great White North Exhibition.  This year the chosen theme is The Group of Seven.  Participants were to choose a painting or artist from the Group of Seven and make their work based upon it.  I chose Red Maple, by A.Y. Jackson.  And my neckpiece, Drifting, imagined a moment in time after the one depicted in the painting, when a stiff breeze had lifted the turning leaves from their branches and set them floating on the churning river beyond. 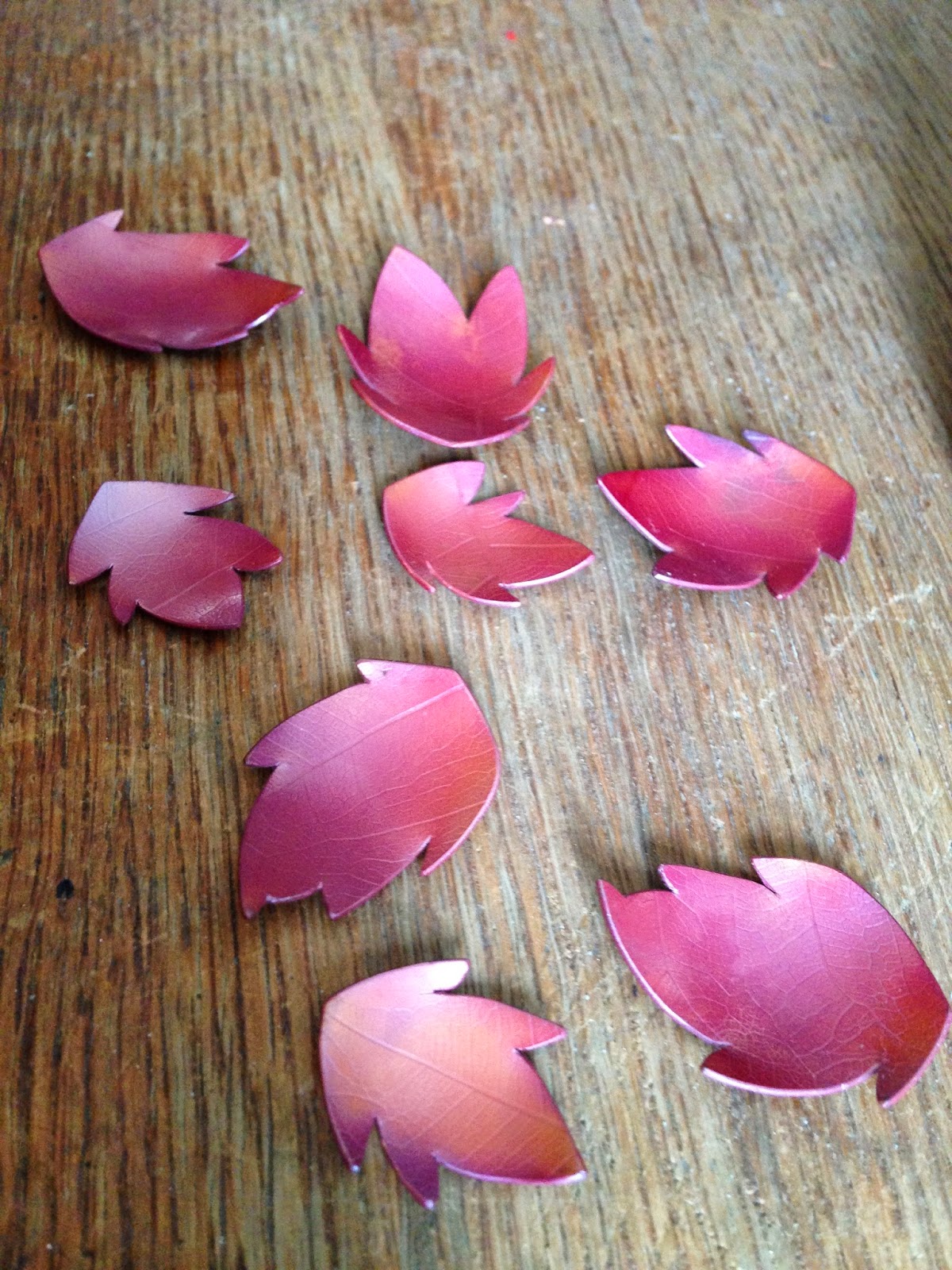 In making this piece I began with the leaves, so as to establish the scale of the piece overall.  I roller-printed a skeleton leaf into copper, before sawing out each shape by hand.  Then I heat-coloured the copper with a torch, quenching them in boiling water.  This gives the copper a bright red colour.  Using my dapping block, I then put a gentle curve into each leaf.

I referenced the river in the painting to create the sterling silver swirls that suggest the eddies in the fast-flowing water.  These I etched, and shaped using my dapping block. 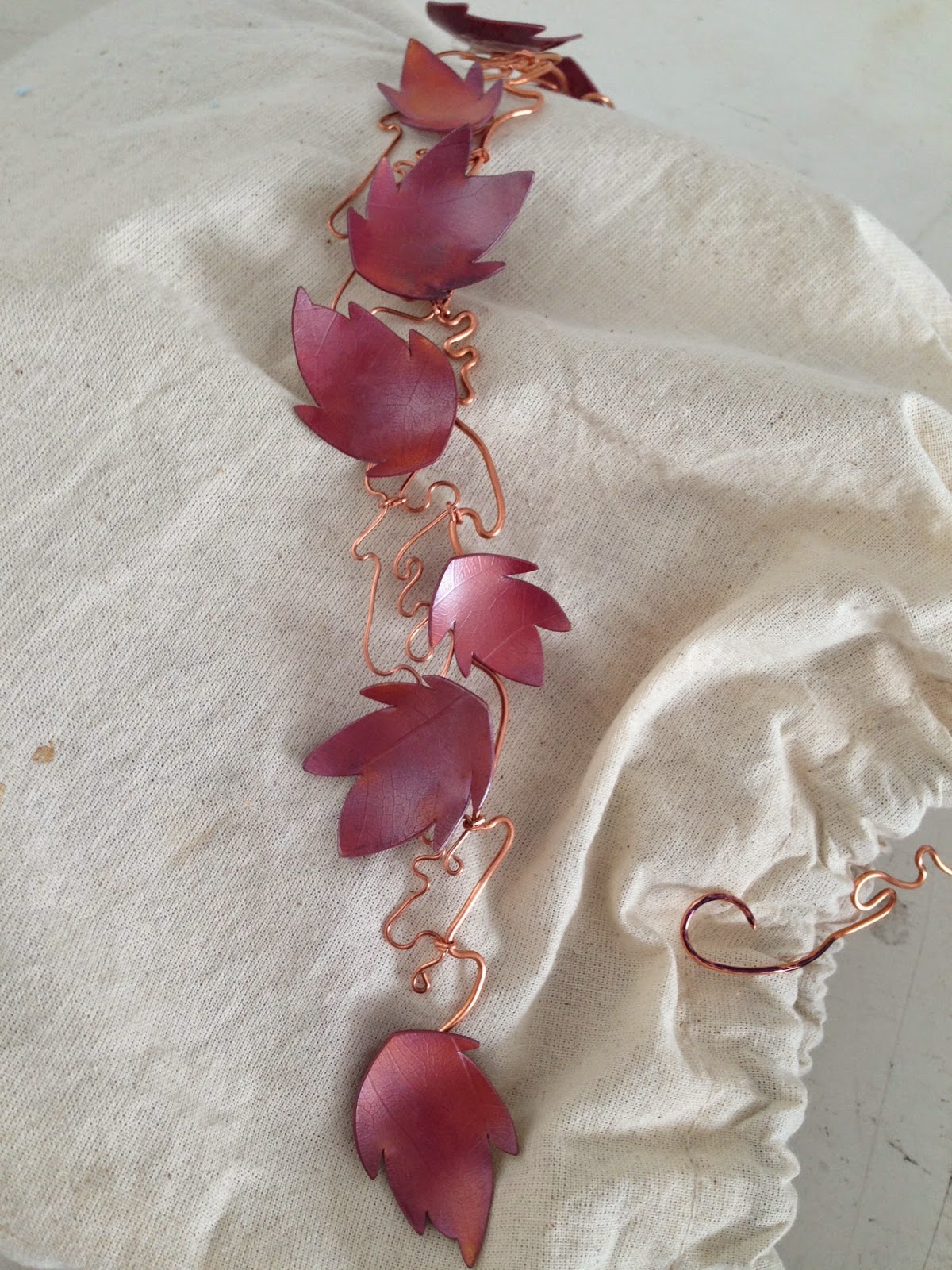 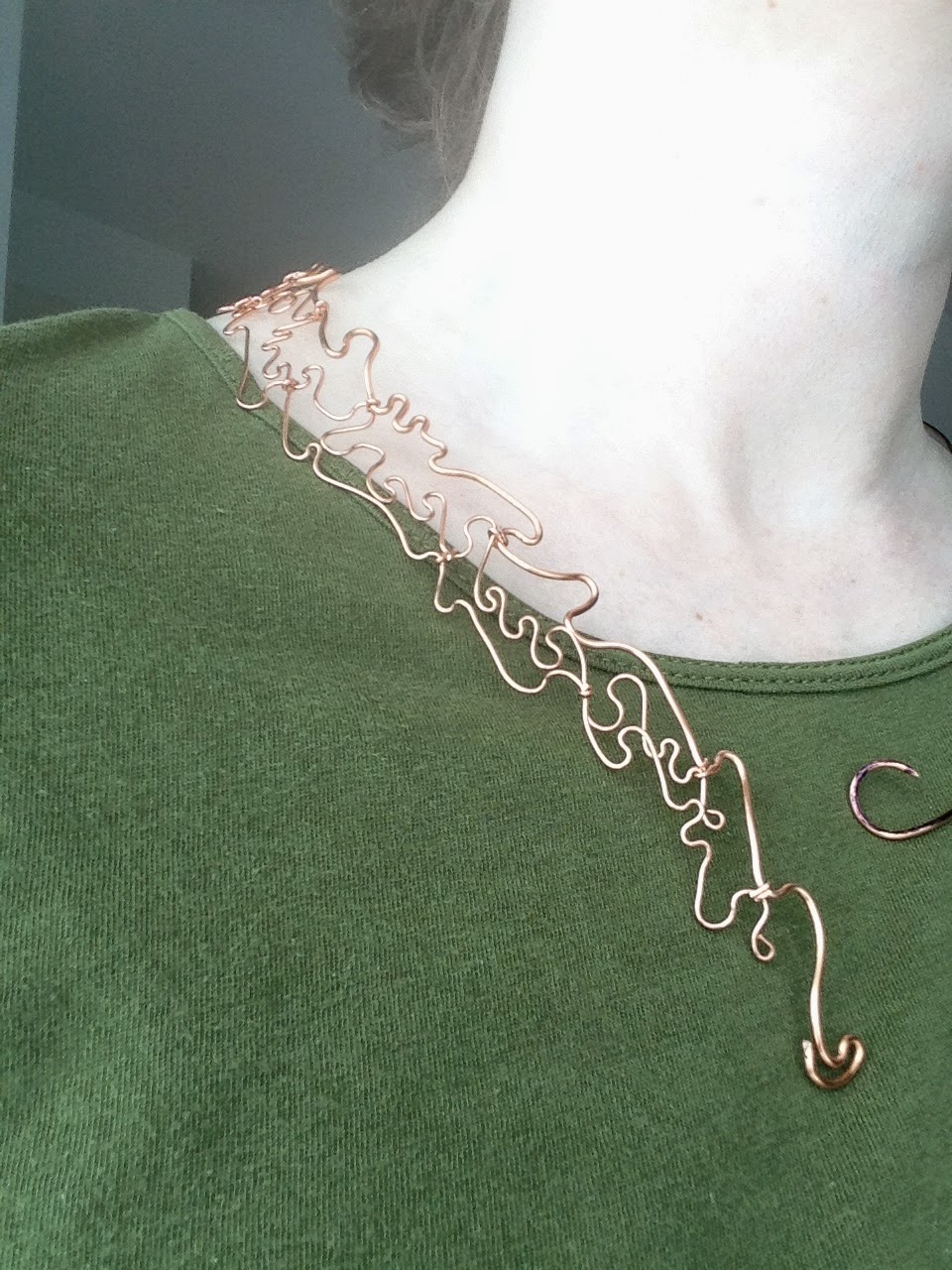 Because the neckpiece would require quite a quantity of silver, I did a mock-up first in copper, to determine the length of wire I would need, and to establish that the design I saw in my head would actually look the way I imagined.  Once the copper necklace was made I laid the leaves in place to see how the proportions were working out, and I also marked where I'd be soldering on the silver "eddies".  Then I twisted silver wire, soldering it together, and giving it a hammered finish so the light would bounce off it in a pleasing way. 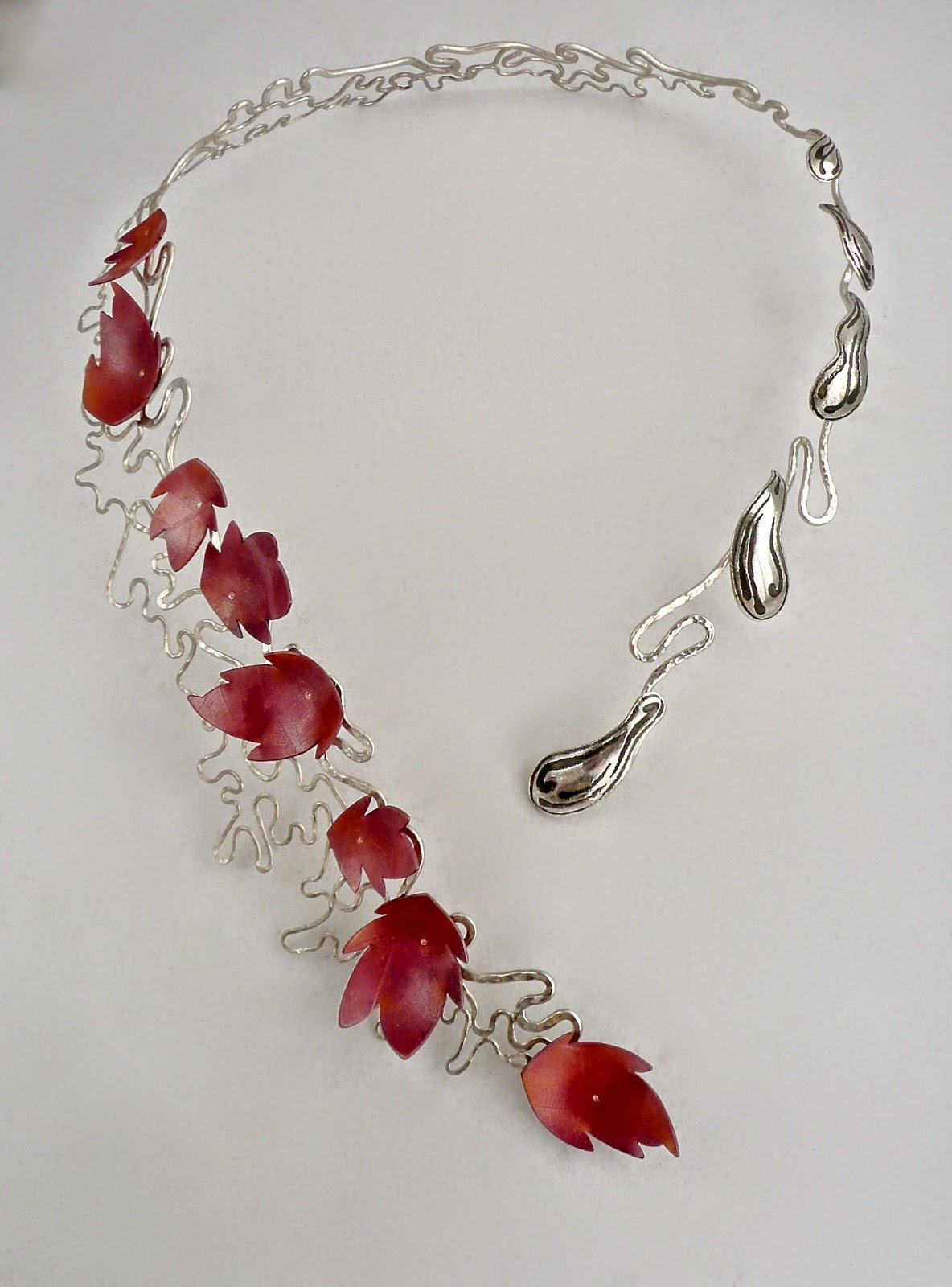 All in all it came together much as I'd hoped!  And crossing my fingers for yet another year, I mailed it off to Toronto.  I'm so happy that it was chosen by the jurors to be included in this year's exhibition.  And I'm even happier that the tradition of this national juried show will continue with the enthusiasm of 18 Karat Studio and Gallery behind it.  I'm looking forward to seeing the exhibition in its entirety, and seeing the inspiration other artists drew from The Group of Seven.

If you are in the Toronto area, you can see the exhibition this coming week, as it is to be included in Toronto's Art and Fashion Week, April 21st-25th, 585 Dundas St. East, 6-12pm.

In the month of July the exhibition will be on display at 18 Karat Studio and Gallery, 275 Dundas Street West.  A reception is planned as well, and I will pass along details as they become available. 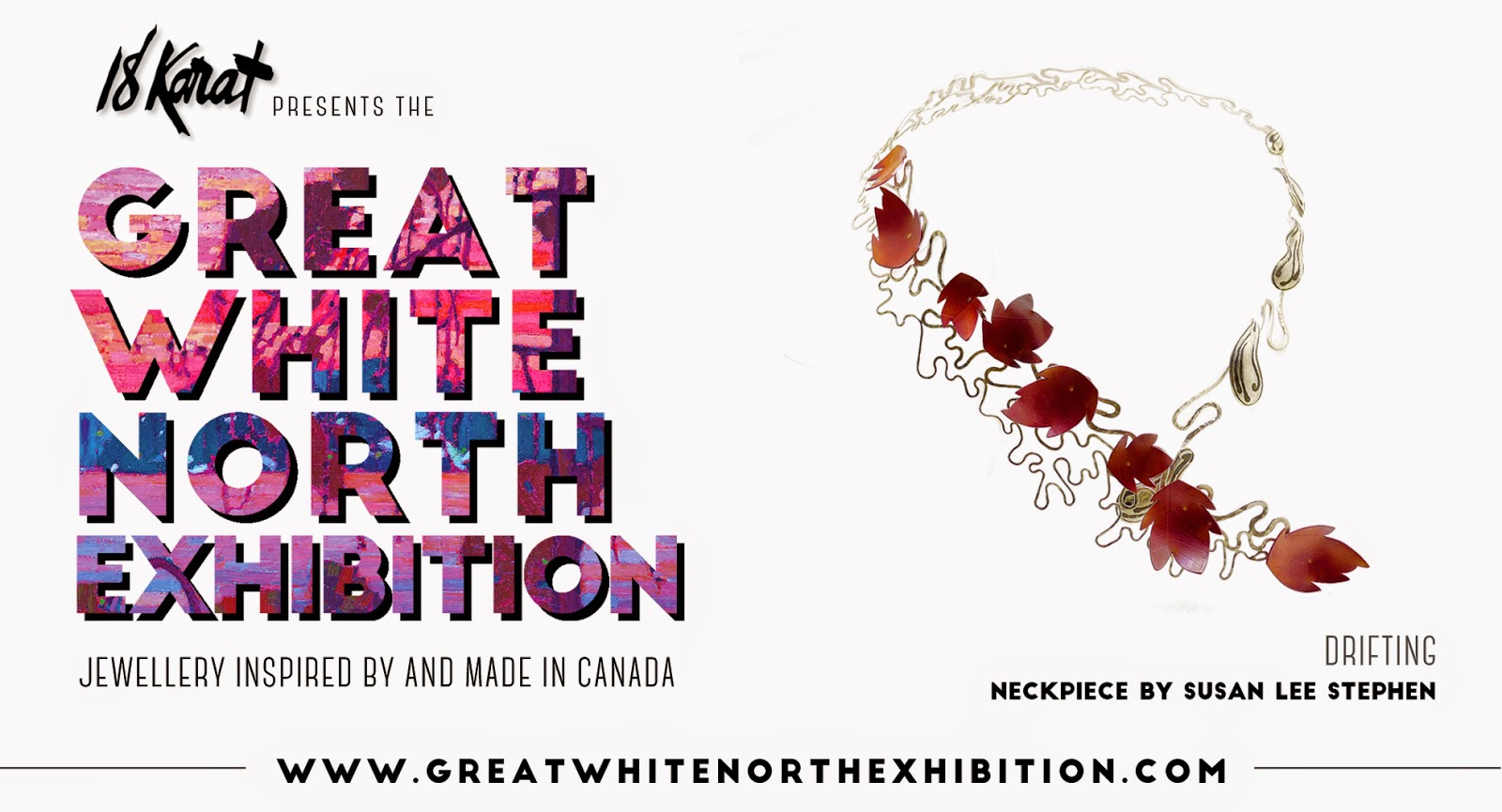