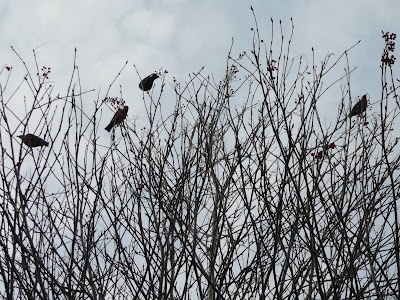 The recovery time after a craft fair is shockingly long.  I have slowly come back to my bench in the last few days, and focused my energy on doing something.  But it has felt forced.  Today, however, the tides have turned, and I feel invigorated by new ideas and inspirations.  I happily blame this on the snow that was blanketing the world when I awoke this morning.  (Just yesterday I bought new winter boots!)  The crispness of the wintery air was exhilarating.  After spending the morning working on jewellery, it was out into the world we ventured.  First to The Bookery which was having another 30% off day as it slowly (sadly) fades into nonexistence.  Snapped up a novel and book on owls that I can't wait to settle down to read.  Then on to Devon House to partake of the open house event accompanying the opening of the Comfort and Joy Show.  Very neat Kitchen Party scene in the works of Kevin Coates carvings.  Just a few carvings in the "kitchen" just now, but as we draw nearer to Devon House's 20th anniversary, more carved figures will arrive to share in the celebration.  Drop by between now and then and have a look, and even place a bid on this exquisite silent auction collection. 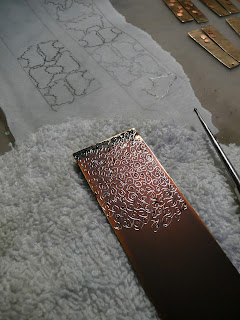 Home again and back at my bench I got to work making fleece for a new flock of sheep pins, since I sold out of the last (and first!) ones at the Craft Fair.  It's nice to have hit a popular nerve with this idea.  I've got plans for turtles next...  and squirrels and foxes and owls and and and..... !

The excitement of fresh ideas is tempered somewhat by the news of Nova Scotia College of Art & Design's struggles as of late.  Although I've never attended (yet!) it is shocking to think that an institution that offers such a diverse range of professional art and craft skills training could be in jeopardy.  If you value the vitality that a growing community of local craftspeople brings to your community, please take the time to sign this petition to help governments understand that these hands-on programs are valued in our post-secondary educational system.  keep-nscad-university-intact-and-independent 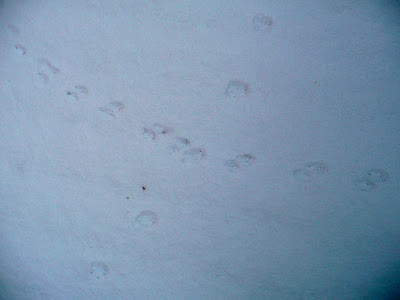