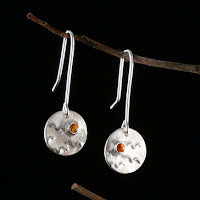 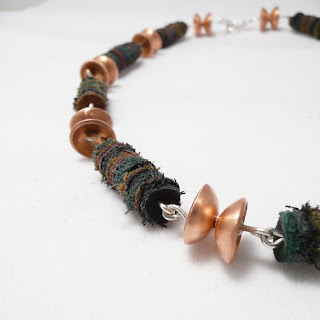 We're buried in snow today, but I've been busy doing digging of a different sort.  Tomorrow, myself, Jason Holley, and Alexis Templeton are having a SALE!!!  I just love doing group things like this, it's going to be SO MUCH FUN!  (apologies to those that find CAPITAL letters offensive!) 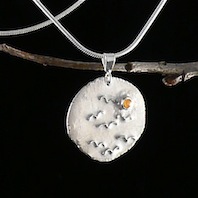 I've gone through ALL of my jewellery, not just the stuff that stands cohesively-well together in a craft fair setting, and I've found some pieces that maybe are just the only one that's left, or maybe it was the only one that I made in the first place.  Items that I'm really quite pleased with, but they're having trouble finding a home because they look lonely in a craft fair display, where many items of similar style stand together, and these items stand apart. 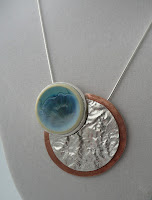 AND, with the excitement of having this event approaching, I've been motivated to work on two new Crystalline Collaborative pieces.  One of which I've been pondering for some time, and the other of which I thought I knew my plans for, and as I tackled it, they changed entirely.

At right is a stunning example of Alexis' talent with crystalline glazing.  A very gentle blue, with the crystal splashed across the cabochon from one side.  I had planned to incorporate a whale into the design of this piece.  I even crafted a whale tale shaped bail for it.  But after much thought it just didn't feel or look right.  The balance was off somehow, and so the whale bail waits for another pendant.  Instead, I used reticulated silver and where the cabochon cuts into the silver, the outline of the crystal completes the interrupted circle. 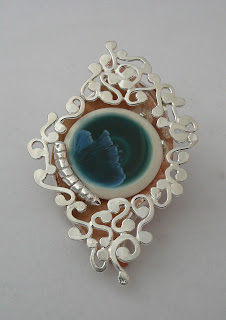 The Butterfly Brooch was determined to come about exactly as I pictured it in my mind from the start.  The shape of the crystal on this cabochon could be nothing other, in my mind, than butterfly wings.  Being so set on the design, however, led me on a much longer journey to complete it than I had anticipated!  And it used a lot more silver than I had expected.  But I'm ultimately pleased with the result.  The only alteration I made from my original idea was to leave out the antenna I'd planned to attach to his head.  I felt they were too fragile a component to be practical.


So these two new pieces will make their public debut tomorrow at Alexis' studio as well.  I hope you can make the journey down to have a look and let me know what you think of them.
Posted by Susan at 6:49 PM