Settling into the homestretch; reflections. 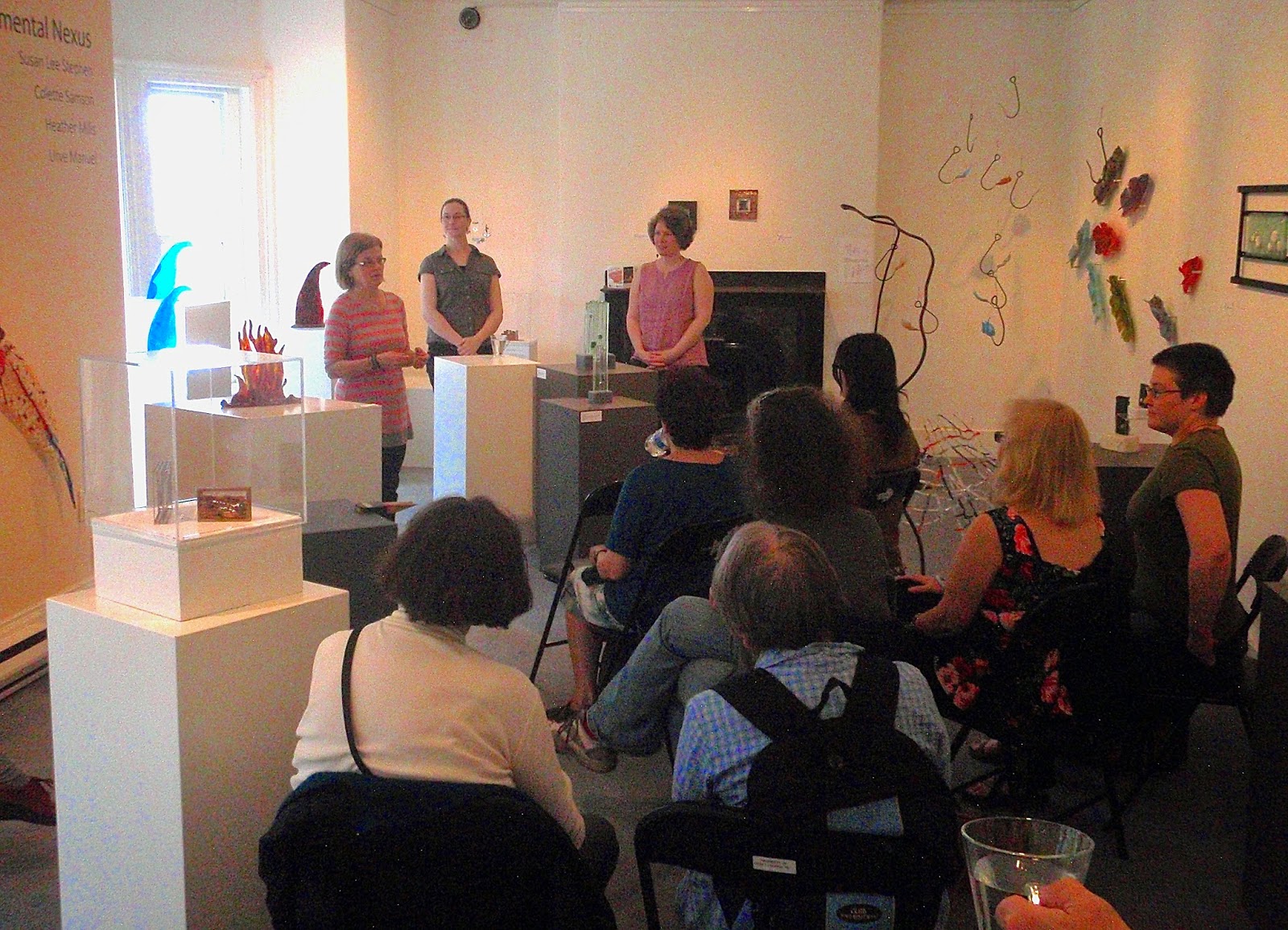 There is one week left until we'll be taking down Elemental Nexus in the Craft Council Gallery.  What a ride it's been!  I've learned a heck of a lot in a very short time.  Knowing the exhibit would be on for over a month seemed like a long time but it has flown!  Some things I'd do differently next time, while others worked out pretty much as I expected.  Most surprising have been the things that, although I'd wish for them to have been different, seem to be left up to the fates, and there's just no real altering that that I can see.

The installation went very much as I'd expected, which got things off to a good start.  I had really put a lot of thought into how I'd display my work, and there really weren't any major glitches putting it all in place.
The opening was a lovely, and other than becoming a touch emotional in my remarks that day, I wouldn't change a thing.  It was wonderful to have my family come, and then spend some time in St. John's.
Throughout the month the work has been on display I've been pleasantly surprised by the queries about how the show is going when I run   into folks around town.


Of the things I'd change, well, I must confess one glitch in the very-well-planned-out installation of my jewellery.  I had been conscious of the need for a secure way to display my work, and I'd certainly thought of how I wanted to display it without using typical jewellery busts and ring holders and the like.  However, I neglected to consider how a potential customer would try on a piece of my jewellery if they expressed an interest in doing so.  I had everything suspended "just so" with invisible thread, but the only way to try it on was to cut the thread and I would then have to tediously re-install it.  Oooops!

Another genuine surprise was scale.  I knew of course how small jewellery can look in the gallery space, and had consciously made some larger (for me) sculptural items to help bring some visual weight to my pieces as they sat amongst the larger glass work.  And still they looked so small!  Next time, I will challenge myself further in this regard.
The last surprise was colour.  With this being a group show, we had of course been in touch regarding our themes and, in some respects, the construction of our various pieces, but it wasn't until all the work arrived in the gallery that I realized we had been working in very different colour scales.  Not that I would want all the work to match per say, but Heather Mills and I worked with subtle earthier colours in contrast to the vibrant and boisterous colours of Colette Samson and Urve Manuel's work.  It did pose some challenges to the installation, but in the end I think the arrangement served to create a variety of moods which kept visitors on their toes as they moved through the space.

Two things that really seem to be in the fate's control, are the weather and the media.  While we did have an adequate turnout for the opening, it was also one of our first lovely spring Saturdays this year, after quite(!) a winter.  If it hadn't been my own opening, I might well have seized the day to awaken my garden too!  The upside of the gallery not being jam-packed though, is that the folks who did come had the opportunity to actually see the work, not just the heads and shoulders of the people around them, in what can be a very stuffy space on a warm day.

Our gallery coordinator, Sharon LeRiche, did her utmost to secure us some media buzz.  I am unsure of the protocols of these things, and so did not want to appear overly pushy in a process I'm unfamiliar with and I left it all in her capable hands.  I undertook the task of extensively postering around town twice during the exhibit - once for the opening, and again for our artist's talk.  Nervous as I was about it, I had hoped we might secure a little interview spot on the Weekend Arts Magazine, (or as they are more often calling it now, Weekend AM).  This city has come alive with artistic endeavors in recent years.  There is barely any time at all left in the year that has not been seized by one festival or another, not to mention all the other gallery openings, concerts, films, and dance events that happen in between times.  I'm thrilled of course to be living in such an artistically vibrant community, but it does mean we can't all get a piece of the media pie sometimes.  Just when I was giving up hope that there would be any media coverage at all of our exhibit, along came Tara Bradbury, the arts reporter from The Telegram.  Hallelujah!  I was not even aware that the article had been written until the day after it was published.  I am thrilled, probably even more so than if we'd had a radio interview since paper has permanence!  You can read her article here.

Mounting an exhibition is no small feat, and I didn't expect it to be.  The challenges were well worth the learning experience, and I truly am looking forward to the next opportunity to tackle such a large body of work.  I am so grateful to everyone who visited the gallery (or will do so in the next week!).  Thank you!  And thank you to the entire staff at the Craft Council of Newfoundland & Labrador for making it seem easy in ways I can't even begin fathom.  Sincere thanks also to the Arts Council for their support of this project.  Now, please be in touch with your feedback once you've visited the exhibit.  Don't dilly-dally, there's only a week left!