Last of the Baubles 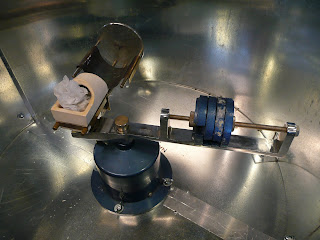 Casting!  I think I thought before this week that casting and mold making were sort of the same, but no.  We did not learn mold making.  We learned the lost wax casting process, and cast our jewellery, but there is no mold that remains to be reused as I had thought.  I do love lost wax though!  I will do more!  We worked with both hard wax and soft wax to create two separate projects.  In the time that was left we were to do cuttlefish bone casting, delft clay casting, and ingot casting.  Unfortunately we ran out of time to do it all.  I had hoped to delft casting as it is the one of the three that I had never done before, but watching a few others attempt it, and having some videos our instructor gave us, I may try it myself later. 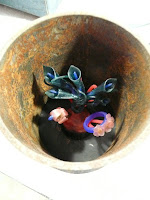 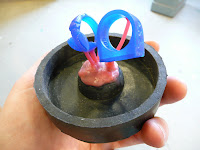 So, the majority of the week was taken up with our lost wax pieces.  In hard wax we each made a ring.  The tricky thing was committing mentally to removing so much material from the wax model, because of course it gets more fragile the finer and thinner it becomes.  But if it remains too thick then the amount of silver needed to cast it is ridiculous.  Working in soft wax made me wish I'd stuck with Fimo modeling as a kid.  Such a different skill than carving to create a shape.  I didn't get time to polish my soft wax casting, I guess I'll work on that when I get home.  I designed it to be interchangeable as a brooch and a pendant.  Spruing (above right) took an insane amount of time, when you thought you were done you really weren't.  And there's a bit of math involved in working out the amount of silver required to cast the pieces.  The casting machine is shown at the very top.  It was a two person operation in order to cast, although with experience I'm sure it could be streamlined so that the process was manageable by one person.  (Ashley was my casting partner, so the lobster ring, poppy ring, and banana penguin (yes banana penguin) in the images above, are hers) 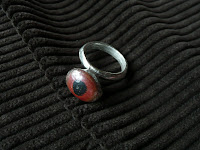 I cast my "wedding band" from the first week in the cuttlefish bone to see if the texture would be pronounced on the casting.  It did show up somewhat, but what was more intriguing was the way the sprue turned out.  I decided to keep it like that for the time being.  It's like an eyeball, (I choose not to think evil).
Mid week we finally made the effort as a class to go out for a meal, expecting a deserted restaurant in a small town we were lucky we'd made a reservation!  Yummy Chinese food.


Saturday was our Show and Sale.  Great fun!  Mostly glassblowers and jewellers, there were a couple of booths by the visual and creative arts students.  Again we were impressed with the turnout in a small town, mostly everyone had some sales.  And it was affirming for those who'd never sold their work before.  We even had a live jazz band which was an unexpected bonus. 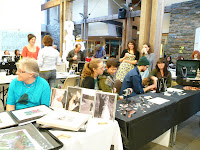 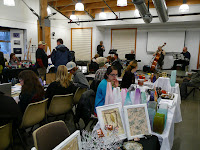